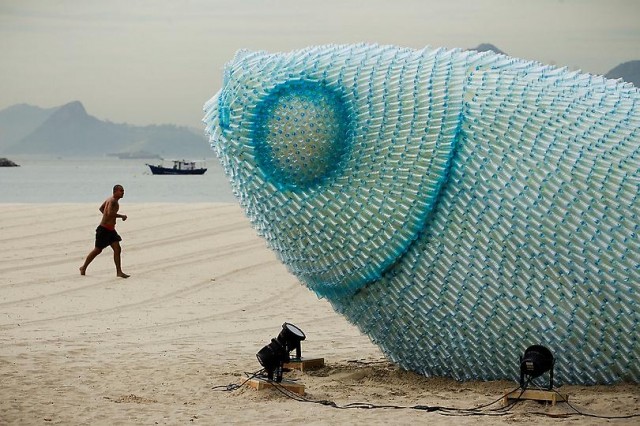 These beautiful pieces of art were assembled on the beach out of recycled water bottles. See more here. While the conference on sustainable development was largely labeled a failure because little to no progress was made on critical issues, this expressive installation will be a startling reminder of the unconscionable waste that continues–at least until the sun degrades it into a gadzillion minute particles that will wash out to sea and join the Pacific Gyre.

Wow, it looks like Mayor Newsom is one of my readers! It takes real guts to make this kind of move!

Author’s note: This post was originally written for our family blog in February 2006. Not much has changed since then, although I have added some additional information.

We have an ongoing debate here at home regarding the “taste” of tap vs. bottled water. I believe that our water is delicious and drink it constantly throughout the day. I am still required–rather it is requested of me–to bring home bottled water for those who have been, I think, brainwashed by Coca/PepsiCo Incs. into thinking that drinking bottled water is more “healthy” and of course, for some it is definitely “cool”. This I have tolerated with my occasional remark about how funny it is that we are both drinking from the tap. (I even once slipped tap water into a “smart water” bottle in the fridge and was rewarded with the response–Man, this is the best water!)

Consider this 2004 report on bottled water: The global consumption of bottled water reached 154 billion liters (41 billion gallons) in 2004, up 57 percent from the 98 billion liters consumed five years earlier. Even in areas where tap water is safe to drink, demand for bottled water is increasing—producing unnecessary garbage and consuming vast quantities of energy. Although in the industrial world bottled water is often no healthier than tap water, it can cost up to 10,000 times more. At as much as $2.50 per liter ($10 per gallon), bottled water costs more than gasoline.

And if none of the above is reason enough to question bottled water, picture this – a floating garbage phenomena whirling in our Pacific Northwest ocean where all the carried-by-the-wind, littered, lost, accidentally spilled and illegally dumped plastic trash swirls together where two currents meet. This devastating article tells the story of Rebecca Hosking who witnessed this plastic in the oceans, far away from land and only seen by a handful of sailors, fishermen and ocean researchers. An end product oil slick as it were, as big as Texas (not an exaggeration), full of bottles, bottle caps, car tires and bits of broken plastic that birds mistake for food. When this plastic breaks down to the size of a fish egg it’s consumed by jellyfish and plankton, the food staple of sea life. So guess who, at the top of the food chain, is not only creating plastic, “disposing” of it, but may be eating it, too. It just never really goes away. You can see parts of Rebecca’s film here where she captures what is happening in Hawaii.

What a bummer! I can’t even begin to think of how to fix this problem. But it is important to hold that image–floating in the ocean out of sight of land is colored plastic debris as far as the eye can see. It is those images that are so necessary to shake us up out of our complacency. Only then can your personal actions take on a sense of mission, moving beyond simple fad.

Am I preaching too much?

Maybe. What I’m really inspired to do is what Rebecca Hosking did in her home town of Devon after she made the documentary film in Hawaii of the plastics in the oceans and the dead albatross chicks full of plastic bits that their mothers had flown in to regurgitate for them. She was able to get all the shopkeepers of the city to agree to ban plastic bags. The shopkeepers had reusable cotton bags delivered to every home in time for the ban. Plastic bag “amnesty” containers were put up throughout town to recycle the existing bags.

We can do this.