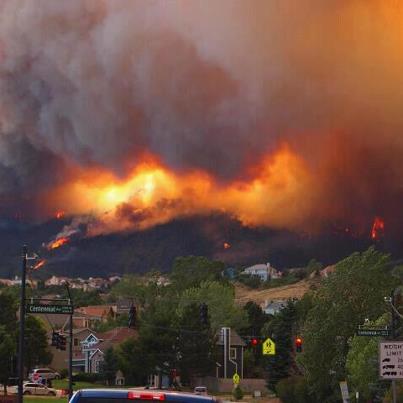 After years of drought and devastation of native pines by the bark beetle, and about a century of forestry practice that put out fires as the population in these areas increased, Colorado fires are nature’s way of dealing with the abundance of fuel. It’s hard to believe but it is also nature’s way of regenerating. The heat of the fire is necessary for some species to crack open seeds and provide nutrients for the next growth. Increased temperatures, lower snowpack levels…all reasons to be debated at another time.

I have family and friends in Colorado so I’ve been following the news on the wildfires pretty closely. The High Park fire, near Fort Collins where I have several family members, burned over 80,000 acres and hundreds of homes. It is now considered 95% contained, thankfully.

But fires further south and west are taking their toll as well. This picture came from Debbi Carlson (daughter of Bobbi for those who knew her). She lives in the suburbs outside Denver and took this picture from her back deck. This was on Wednesday, June 27th and the fire was only 5% contained.

Debbi also posted this video and I wanted to share it because it conveys the fury of nature’s work. Those of us not acquainted with what a fire can do will appreciate its power after watching this. It is a time-lapse video run over several days and while it may seem hokey to have it edited and accompanied by music, in the end it is just an incredibly powerful depiction of nature at work–and the unseen swirl of humanity dealing with it below.

2 thoughts on “Colorado Fires – Nature at Work, Up Close and Personal”